Here it is, the episode where we get the full run down of the Holy Grail War. I appreciate how they split up the information between these two episodes so that there is less to digest for new viewers. I know that myself, and several other friends, felt overwhelmed with the Fate/Zero premiere!

Rin felt a lot more lively when giving Shirou the gist of the war. From the prologue, it felt like she put up a somewhat colder exterior to many of her peers. She would avoid having lunch with her classmates, and tended to keep to herself during school hours. Only when she was alone with Archer, and now Shirou, did she seem more like a normal high school girl. Even though she has the pressure of carrying on her family’s legacy, she doesn’t stoop to cheap blows. She could easily dispose of Shirou, with his guard down, but she continues to help guide him.

Through this debriefing, it’s also revealed that Saber has been summoned in the previous war. With the two wars taking place in such a short span of time, there’s a high possibility of her encountering familiar faces. The Emiya name is also quite recognized by several people. Both Saber and Kirei reacted once they heard the name. Kiritsugu likely had an involvement in the previous war, which is how Shirou got into this mess. 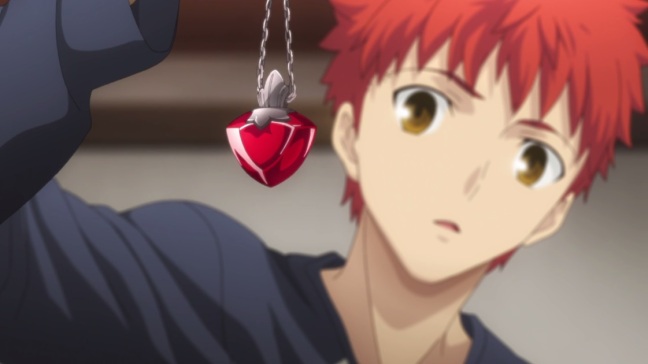 Right off the bat, we’re presented with a mystery. As Shirou prepares to meet Kirei, we see that he still has Rin’s pendant in his possession. We already saw Archer, supposedly, retrieve the pendant and gave it back to Rin. We’ll have to wait until later, to see what relevance this plays in the story!

From Kirei’s description, the Grail seems to be ruthless. It refuses to fully acknowledge a victor, until everyone else has fallen. Even if there were people like Shirou, who don’t want to take the lives of others, they wouldn’t be able to make use of the Grail. It’s a bit hard to tell if Kirei is being blunt, or if he just enjoys seeing chaos and despair. He tries to encourage Shirou that it’s a fight to the death, and that only one master will remain standing. Logically, it makes sense to target the master, but I don’t see how he could bring himself to harm another person.

Shirou’s strong sense of justice prevents him from backing out of the war. Ultimately, taking part in the war is also the best method for protecting others. He could be safe, but he’d just sit idly as a potentially corrupt master claims the grail, and uses it to wreak havoc. The entire village, that Shirou was from, was killed and destroyed as a result of the war. Being the sole survivor, he can’t allow for the risk of something like that to happen again. He decides to put his own life at risk, in order to try and protect the world.

After all of this, Rin and Shirou are in an odd position. They were on friendly terms, and are both schoolmates, but now that everything has been revealed, they’re enemies. They both want to win the war, but I can’t see them battling each other, unless it’s at the very end. Both of them were pretty much forced into all of this (Rin from her family, and Shirou stumbles into it). 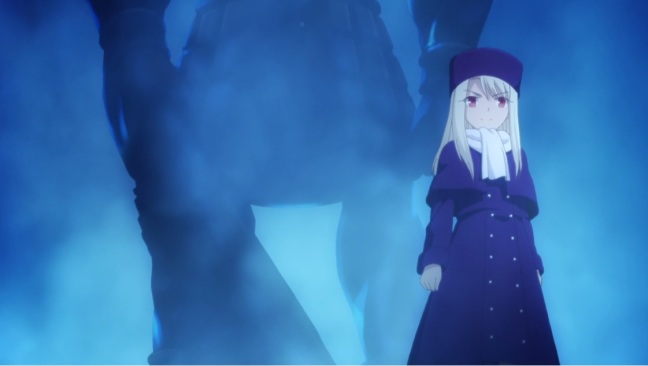 While those two might be on good terms, the other masters likely wont think the same way. We have Berserker and Illya making their appearance at the end, and they don’t look too friendly! Also, the three masters we have seen so far are quite young. It might be difficult for them to deal with all of this mentally, unless they were prepared to take part from a young age.

This episode definitely wasn’t flashy like the prologue or the first episode, but I still enjoyed it nonetheless. I’m already familiar with the rules of the war, but it served as a nice set up, or calm before the storm. Since the war is a big deal to a lot of mage families, I’d assume the other participants were raised with taking part embedded into them. Now that everyone is up to speed, the war can begin!