The long awaited, highly anticipated, “remake” of the Fate series has finally begun! I think I’ll try covering this on a weekly basis, but we’ll see how that goes further down the line. Since I’ve seen the original, the UBW movie, and Fate/Zero, I’ll try my best to make these reviews as objective as possible.

With the premiere being an hour long, I expected to get a large info dump (similar to Fate/Zero). I felt that they explained a quite a bit, without going too in-depth. We get the gist of the holy grail war along with some of the rules that govern it. They kept it short and simple, which was actually enough to pique my interest, but not bore me. I know that the Fate series can be a bit intimidating for those going into it with no experience with it, but I think they struck a nice balance in this episode.

I really enjoyed how we saw things primarily from Rin’s perspective. We get a feel for her personality (tsundere), and gives us some time to become attached to her character. I know that a lot of premieres tend to pack a ton of action and characters into their episode, but I usually find it pretty hard to follow. With all of the focus being on Rin, I found the pacing to be a strong point for this episode!

As mentioned, Rin’s character seems to be pretty tsundere-esque, but there is a bit more to her character. She’s incredibly prideful, having come from a renowned family of magicians, she has to keep up their legacy. Because of this, she’s also under a lot of pressure. Even though she appears to be the only member left, she wants to fulfill her father’s wishes. In addition, she appears to be pretty lonely to me. Within school, she is often walking alone and she lives in a large, empty house. While she doesn’t have any trouble talking to others, she came off as a bit distant from everyone else.

The overall atmosphere was a lot more relaxed relative to Fate/Zero. In the prequel, the participants were much older, and the focus was only on the holy grail war. Here, we have a high school girl who takes part in the war, but still continues to attend school on a regular basis. Hopefully we don’t resort to too many high school tropes for comic relief, but there are some upsides to this. It was nice to see Rin’s normal life in comparison to her life as a Master.

Even with the relaxed environment, when it comes down to the holy grail war, it’s full on serious mode. Since Rin avoids unnecessary attention, she, and the other magicians, make their moves under the night sky. Masters are moving without hesitation. The war has just begun, and people are already planning their attacks.

As expected from ufotable, they always make pretty anime. The fight between Lancer and Archer was well choreographed and really upped the adrenaline this episode. While things were progressing a bit slowly, we suddenly get some full blown action to satisfy all types of viewers!

While this week we got Rin’s perspective, I believe we’ll be seeing things from Shirou’s next week. I think this is a pretty effective means of story telling. We get to see all of the events, but with some gaps of knowledge. Once we combine it with Shirou’s perspective, we’ll get the full picture of what happened. With all that said, I’m pretty excited to see the rest of this Fate Stay Night adaptation since the first episode was exactly what I was hoping to see! 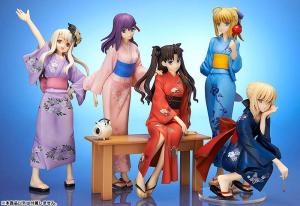