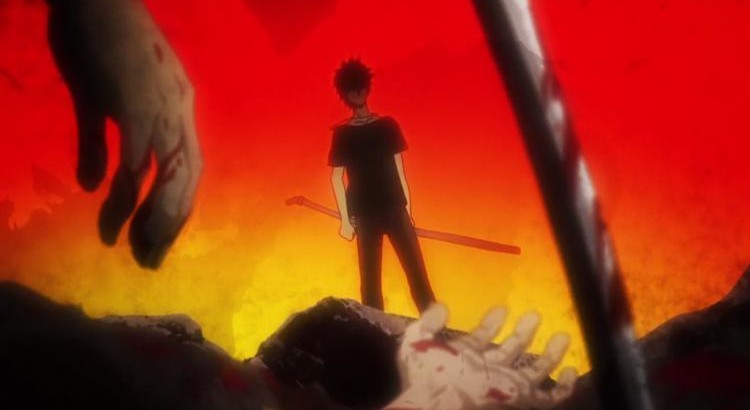 I guess my weekly post will be pushed back to Sundays now with the time slot change for Gangsta.

Nic and the other Twilights have had a rough time in the past. Being treated as sub-humans, they were forced into slavery and used as soldiers. It wasn’t until later on where they would be given some rights and welcome into society. Nic especially had it rough. Growing up as a Twilight, he must have endured a ton of pain and bullying from others and it doesn’t help that he’s also deaf. Unable to interact with others, he has no choice but to sit idly and accept all forms of pain coming his way while not fully comprehending why it’s happening.

The two Handymen have an inseparable bond with each other. Even though Nic killed Worwick’s family, it seems that act had freed them both from the oppression and stress they were facing. Nic couldn’t survive in the outside world on his own as a Tag which was why Worwick sold himself to keep the two alive. He also does his best to watch over Nic since he can be reckless with his own body and has to restrain him from doing things that could get him killed.

Even in today’s more “modern” society, we can see how little respect people have for the Tags. Monroe is familiar with Nic and even hired him for protection, yet he treats him like a dog. He starts taking bets and treats his life like it’s a show.

Nic and Doug’s fight is rather interesting. Both maintain the is amongst the Tags yet Doug has the upper hand for the majority of the fight. It isn’t until the battle wears on where Nic begins to overpower him. By being reckless and overdosing on the uppers, Nic’s stamina is unaffected. As Doug begins to wear down, Nic maintains his strength. Just as Nic is about to deliver the fatal blow (which likely would have had massive repercussions), Ginger steps in to save the runt.

It seems that everyone is afraid of Gina, head of the Paulklee Guild. When they heard that she was going to get involved, everyone rushed to stop the fight. Had one party been killed, it likely would have been the end for the other. Despite how strong the Twilights are, it seems that they’re still trapped within a cage. The use of downers completely negates them as they can be sedated relatively easily.

Apparently Nic’s reckless behavior with the Celebrer is reminiscent of the mysterious Veronica. I’m curious if she has any relation to the woman that Nic held at the brothel. Either way, it seems to be a soft spot for both Nic and Worwick. From what we know, she’s a woman that they took in (similar to Alex) and who overdosed on Celebrers frequently which likely caused her body and mind to deteriorate.

Back at the office, Alex has been alone for some time now and continues to have nightmares about Barry. She had no real purpose in life or this city as she was dragged into it by him. Now that he’s gone, so abruptly, she has been struggling to move on.