The sea creatures have begun their invasion of the surface and the hero association has been sending their forces to neutralize the area. While all of this is going on, Saitama has been casually wiping out the sea creatures and slowly rising in rank. The association has to begin calling in all of their top ranked heroes which draws the dynamic duo towards J-City where the Sea King makes an appearance.

Every week, the strength of the opponents have been creeping up ever so slightly, but now a real threat appears. The Sea King completely overpowers all of the heroes who have tried to oppose him, including the S-Rank Puri Puri Prisoner. To be fair though, a bunch of villains have seemed quite strong, however the second Saitama enters the ring, they always turn out the same way. Maybe this Sea King will be different, but it wouldn’t be called One Punch Man if Saitama couldn’t make due with him in one punch.

Sonic manages to escape from prison after his little hissy-fit he threw when Saitama wouldn’t pay him any attention. Similar to Saitama, he yearns to face a strong opponent, but the Sea King is more than he can handle. While he has speed on his side, he lacks the power to actually cause any damage to the Sea King. On top of that, the Sea King only continues to gain strength as it begins to rain. Sonic decides to bow out, having no obligations since he’s not a hero, he’d rather save his own skin and live to fight another day.

Within the shelter, we see some familiar faces. These were all minor heroes we’ve seen in the past. While they’re no match for the Sea King, it’s nice to see that they adhere to their values and try to buy time for the S-Class heroes to arrive. 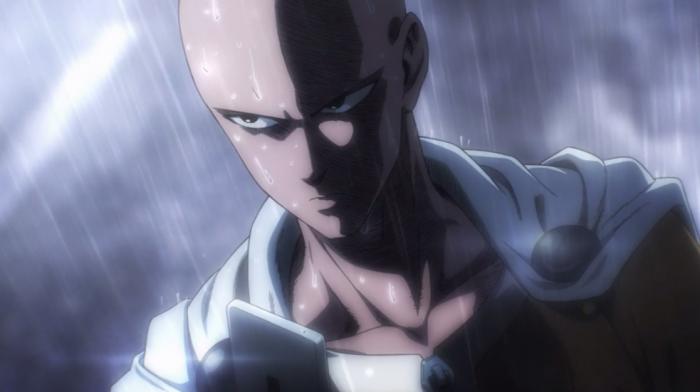 Next week should be an amazing episode with Genos arriving and Saitama hearing the news of a strong opponent. It’s rare to see Saitama take things seriously so it’s exciting to see him so pumped about the news!

You can watch One-Punch Man Episode 8 on Daisuki.net

One thought on “One Punch Man Episode 8 – Review”