Heart, what a fitting title for this episode… Not only do we have our own hearts ripped from us, but Shinichi literally does the same.

Where to begin… First off, it was adorable seeing Migi get all excited about the evolution of parasites. Up until now, he’s been minding his own business, trying to survive, but the day where his fellow parasites can roam and live freely is approaching. He’s only concerned about his own survival. While he finds it fascinating, he would rather not become involved, encouraging Shinichi to stay out of it.

The parasites have come a long way since they first landed on earth. Parasites would often engage with each other, out of survival instincts. Now they’re grouping together, and working towards the common goal of their mass survival. After all Shinichi’s been through, I can’t fault him for being a pessimist when it comes to parasites. He’s always ready to assume the worst when it comes to them. Back then with Hideo, who honestly wanted to co-exist, Shinichi was quick to judge him and these new parasites as well. 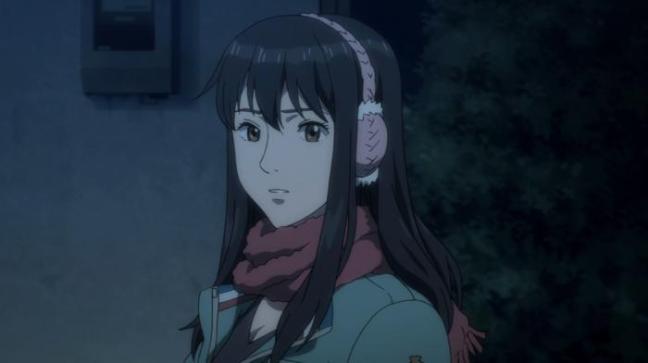 Kana has the misfortune of carrying her special ability. Not being aware of the situation, and being a pubescent teen, she confuses her senses for love. Perhaps it’s because Shinichi is the only human like creature out of all the parasites she detects. She claims that it’s a special connection, even though she’s been misled by her ability several times. Her infatuation with Shinichi has completely blinded her, hindering her sense of judgement.

Even after learning everything, she blows it off and only hears what she wants to hear from Shinichi. Not caring about the parasites, she takes his whole explanation as an insult, thinking he’s trying to scare her off. She forces Shinichi into a corner. Even though she wants to see Migi, I doubt she was actually interested. The whole sake of the promise was just so that they’d have a reason to keep in contact.

Even though Mitsuo was a jerk, I can’t help but feel bad for the guy. He genuinely cares for Kana and doesn’t want to see her getting hurt. He probably regrets that their last conversation ended on such a sour note, but it can’t be helped when Kana lacks all rational judgement at this point.

Although Migi wanted to avoid unnecessary confrontations, he still has his own and Shinichi’s best interest in mind. Rather than run the risk of Shinichi getting into trouble, Migi still decides to fully disclose all information to him. Even though he threatened him earlier, Migi wouldn’t do anything to jeopardize Shinichi. He even agreed to expose himself to prevent Shinichi from making additional decisions on his own.

Kana decides to use this meeting as a chance to try and win Shinichi over yet again. Relying only on her power, she sets off to find him. Even until her last breath, she was completely delusional. Not realizing the situation she’s in, all she can think about is Shinichi. Her obsessive love for Shinichi was what led to her downfall.

Shinichi arrives a few seconds too late and has to bear witness to her death. He can’t help but feel at fault for what happened. When an event like this happens, you can’t help but look at all the small details that may have led to it. He had good intentions, and shouldn’t blame himself for the events that happened. He’s had to watch so many people around him die at the hands of these parasites that they’ve broken him. No matter how he looks at it, it’s him against the world. Being one of the only people capable of handling the parasites, there’s no way for him to possibly save everyone. Humans being too weak to defend themselves, Shinichi hates the fact that people are being killed off so easily.

Overall, it was an amazing episode. Kana had slowly been becoming more obsessed with Shinichi throughout the season. In this last episode, her stalker behavior and obsession completely exploded. We watched her go from her confused stage, into her denial stage, where she tunneled on the idea that it was fate connecting her to him. Unfortunately, she never got past that stage since she lost the ability to reason because of this. Shinichi also continues to progress. He gets colder and colder as he has to witness more people getting slaughtered before his eyes. He always tries to protect others, but its impossible to save everyone.

You can watch Parasyte Episode 12 on Crunchyroll