An entire episode where Shinichi is placed on the back burner, as the mission begins.

Things started off rather smoothly. No parasites were being detected in the first few rounds, and everything seemed to be under control. The first target is finally identified, and they take it out without causing too much of a disturbance.

Yamagishi views the parasites as non-sentient beings. He doesn’t believe they’re capable of thinking on the level of humans, and treats them as machines. All he has to do is shut them down and then there will be no repercussions.

While the evacuation and extermination are going smoothly, both parties begin to get antsy which leads to complications. After not detecting any other parasites for a few rounds, they bring Uragami in. In the event that their technology fails, he can sense them out. Unfortunately, he’s likely to cause a huge ruckus, which could result in wide spread panic from the civilians.

The parasites catch on to the plan and begin their counter attack. Not only do the find a weakness in their system, but they drag innocent civilians into the crossfire. All hell begins to break loose, and the cops can’t waste time. They end up killing dozens of civilians due to this chaos.

At this point, the humans are being threatened by the disguised parasites as well as the people who were supposed to protect them. Yamagishi sees everything as a means to the end result. In order to see all parasites being eliminated, he doesn’t care how many people get caught in the crossfire. It just ends up becoming a massacre. At this point even some of the officers are beginning to question their actions. They’re killing parasites because they kill humans with no remorse, yet here we have officers blindly firing at people.

Amidst all of the chaos, Hirokawa manages to sneak away. We don’t know much about him, but Reiko wanted to mention something about him before dying. Gotou even acknowledges that he can bypass detection if he really wanted to, yet he chooses to stay among the parasites. 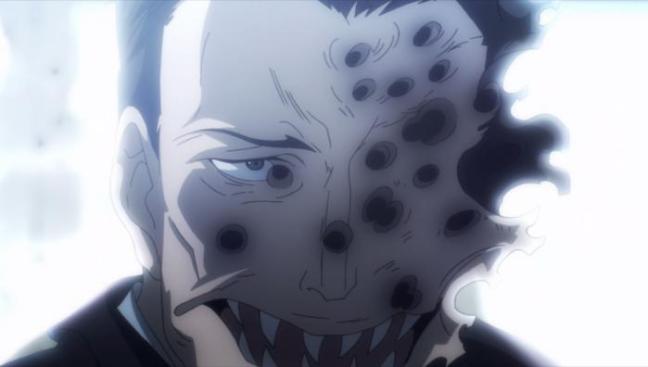 Uragami’s squad seems to have some self control at least. They await for his judgement before firing. Without their great leader, they ended up following Gotou rather than just shooting him up on site. The bullets have no effect on him. Seeing how his entire body is made up of parasites, he doesn’t suffer the same vulnerabilities as a human’s body.

Seeing this massacre from both perspectives, Tamura Reiko was definitely onto something. Humans out number the parasites by far, and their potential, when combined, is limitless. The parasites really are vulnerable creatures as well. Having a human body, they can be killed in the same way any other human would be killed. On top of that, they’re born with the instinct of survival. These instincts tell them to consume humans, which they have little power over. While Reiko mentioned she was able to survive on normal food, not many parasites were able to develop mentally like she was.

Shinichi still has yet to participate in this mission. With Gotou seeming to be unstoppable, I figure Shinichi is the only one who can stop him. Even then, Shinichi was powerless against him the last time they met, so unless he has some special level up, or plot armor, I’d say this mission will end in failure.

You can watch Parasyte Episode 20  on Crunchyroll