Well, we’re finally here, the end of the road for Shigatsu wa Kimi no Uso. It was an interesting journey. There was a lot of heartache, a lot of dramatic moments, but the journey was still beautiful.

The episode continues with Kousei’s final performance. Even though he’s going through a lot, worrying about Kaori, he has to acknowledge everyone that has helped him along the way. He can’t let them down. Everyone has come to watch him play and he has to deliver. When he broke down, he was lost and felt alone, but seeing everyone supporting him tells him otherwise.

Meanwhile, Kaori is going through her operation, where she lies between life and death. While Kousei gives it his all, he zones out into his own little world where only he and Kaori exist. She’ll always exist within him, even if she’s not physically by his side. Here, Kousei can finally have that duet that they had promised each other.

As the song draws to a close, so does Kaori’s time. All of Kousei’s emotions can be felt through his music. The mood is peaceful and serene earlier on in the piece, but towards the end it becomes chaotic with his desperate pleas for her to stay. In the end, all he can do is use this performance as closure with Kaori. He was finally able to “play” with her again and thus say goodbye to her.

Unfortunately, Kaori doesn’t survive her surgery, and leaves Kousei with a final note. As the seasons change, he finally reads her final message to him. I won’t repeat what was said, but I’ll just say it was a beautiful and innocent note. She saw him perform the first time, and like Emi, she was completely captivated. His music managed to touch and inspire her, completely changing her life.

When she finally had the chance to meet him, things were different. She had no idea how to approach him as he was surrounded by his close friends. She was too nervous to confront this boy who changed her life. All she could do was sit back and watch as an outsider. When she found out her illness was more severe, she made the decision to live the rest of her life without regret.

To cross paths with Kousei, she told a lie back in April. To get closer to him without causing friction within their group, she needed an excuse to meet him. She knew she wouldn’t be around for too long, and didn’t want to cause problems for them once she was gone. She kept her distance from Kousei but was still able to spend time and help heal the one who changed her life.

When she was finally able to meet Kousei, it was surreal for her and she even cried. But as she got to know him, he didn’t match the image she had in her head at all. It took a lot of time and encouragement, but she finally brought out the real Kousei that disappeared during that performance.

She also finally confesses her feelings for him. She knew it’d only cause him to mourn even more had she been open about it during their time together, but she had to let him know eventually. She treated him harshly because she loved him and is sorry that she couldn’t have spent more time with him.

As the series draws to a close, Tsubaki finally confronts Kousei after Kaori’s death. Even if she’s no longer with them, Kousei doesn’t have to be afraid of being alone ever again. He has people by his side who are always going to support and be with him.

Almost a whole year has passed since the start of the season. It started off with Kousei’s life being frozen in place, as if nothing was moving forward and he was stuck living in the past. Now, as we embark on a new spring, it’s almost as if the time he spent with Kaori was just a dream. The world looks exactly like it did one year ago, but with the exception that she’s no longer here. He can’t look back though and has to continue moving forward into the future.

I’m really unsure of where to begin with this, so I’ll just run through my general thoughts about the series. This was one crazy ride, filled with a ton of emotional moments, and quite a bit of melodrama at times.

I guess I’ll touch on some of the common criticisms I’ve seen from the series. At times, the drama can feel really forced and over the top. For middle schoolers, they also speak in a pretentious manner. At the same time though, they’re also musicians, and they’re emotional people who express themselves in such a way. Anime is a form of art, so I can’t really fault them for their poetic dialogue. 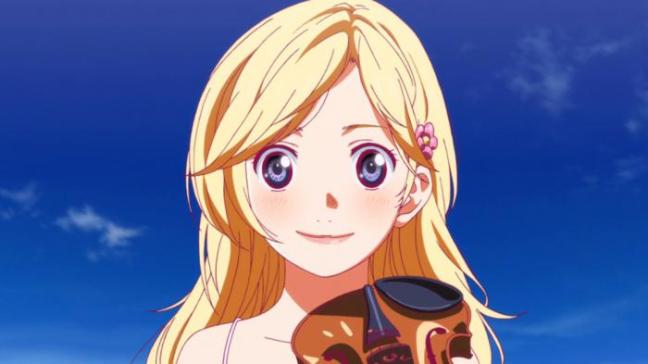 The ending was foreshadowed and heavily implicated since early on in the series. I don’t think Kaori’s passing really came as much of a shock to me as I thought it would. From her personality, and all of the things she spoke of, it should come as no surprise that she had little time left. I guess it may have felt a bit anticlimactic for her to just pass on during an operation. She was weak, but there weren’t any huge warning signs that the operation could kill her. She kind of just passes on suddenly and we don’t really see much of the aftermath (the mourning). Even with that though, something about reading her letter just got to me and made the ending beautiful.

I don’t think her surviving could have delivered a satisfying ending. The entire series, Kaori pushes Kousei forward so that he can get back on his feet. If she were to survive, Kousei could continue relying on her to bring color into his life. While he experiences tragedy for a second time, Kaori’s death is a completely different experience. It was almost as if she were an angel, just passing by and helping Kousei before vanishing off into the sky. She had fulfilled her purpose since Kousei was able to continue moving forward, thus overcoming his past self.

For the entire series, we had been seeing things from Kousei’s perspective. Kaori was this wild and bold girl who wasn’t afraid of anything. When reading her letter though, we get the exact opposite. She was an incredibly shy and fragile girl who tried her best to change just so she could leave an impact. Just seeing Kaori’s perspective on her life really hit me hard, probably harder than her death itself. She left Kousei with an incredible gift by helping him overcome his past and move on with his life, even if she can’t be part of it.

Just looking at the romance aspect of the show is pretty painful for me. It was evident since the start that Kaori and Kousei had both loved each other. Kousei kept his distance because he was insecure and didn’t want to cause complications for his best friend. Kaori kept her distance because she knew it’d be even more painful for Kousei if they got any closer since she wouldn’t always be with him. In that sense, it’s a tragic but beautiful romance that was never meant to be.

In terms of character development, I’d say Kimi Uso did an amazing job at exploring each character. Kousei overcame his fears, Takeshi stopped holding onto the past, Nagi managed to reach her brother and find a passion in music. Tsubaki finally acknowledges her feelings, Kaori got to live her life to the fullest, and Emi has become a more mature woman. The only character who didn’t change that much over the course of the series would probably be Watari. Even then, we did get to see some glimpses of weakness from him (losing his soccer match), but overall he was an awesome friend who supported others from the start. 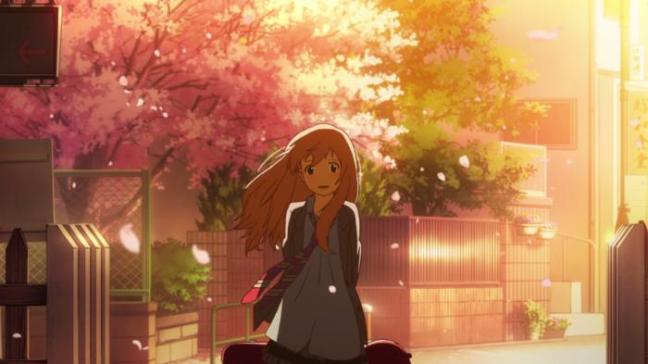 Overall, Kimi Uso was an amazing adaptation, and completely faithful to the manga. The series was paced at exactly 2 chapters per episode (22 episodes to 44 chapters). In fact, I think the anime even surpasses the original source material. When you have a story about music, you really need the sound to bring everything to life. While the manga certainly was enjoyable, the colors and music completely elevated the series for me.

In the end, I think Shigatsu wa Kimi no Uso may have become my favorite anime series of 2014 (surpassing Barakamon on my previous list). There might have been some weaker points towards the middle of the series, but the ending is what really caught my attention. For the most part, I remember an anime the most based on the ending of the series. Nagi’s arc was my favorite in terms of character development, and Kousei’s final performance to Kaori was the perfect way to end the series.

While I’m a huge fan of epilogues, this story was about the lie in April, and how Kaori passed by Kousei’s life. I feel like this open ending suits the series and lets us look towards a new beginning for Kousei.

I had fun doing weekly write ups for this series. Even if I’m not the most artistic or poetic person, I enjoyed all of the symbolism and trying to analyze the dialogue of the characters. Thanks to those of you who read my weekly write ups, I appreciate it a lot!