Well, there was an awful lot of cracks in this episode. Not only did Sinon continue to display hers proudly, but it also aided Kirito in cracking the secret behind Death Gun! 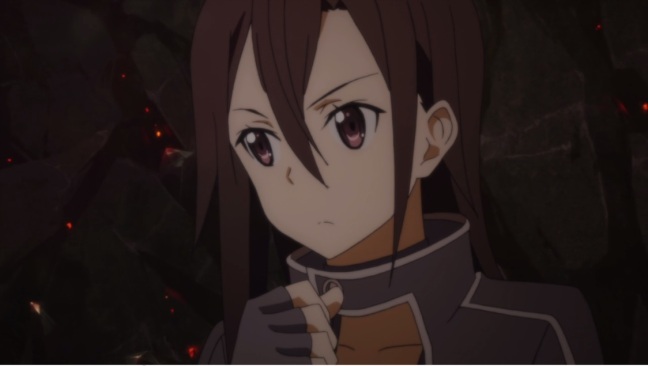 I feel like I’m missing something here, but Kirito magically pieces everything together. Some of the clues were there, but I’m finding some of his conclusions a bit of a stretch for the normal person. In particular, the idea of the whole ritual is for Death Gun to check his wristwatch seemed too ridiculous to me. I think leaving it simple, and saying it’s for the sake of the illusion would have been fine.

The entire concept of Death Gun sounds pretty amateurish after hearing Kirito’s deduction. They kill people by hovering over people’s shoulders to gather their information. They then break into their houses, and inject chemicals as they’re playing the game. You’d think that the police would be able to notice forceful entry into their units, or the needle insertion on the victim. Even if these guys were loners and lived alone, you’d think that any investigation would have dispelled the whole Death Gun myth from the start.

Now that Sinon has learned how Death Gun works, she breaks down once again. In game she’s able to keep up her Sinon persona, but once she feels vulnerable, she reverts back to how she normally is. She loses all control over herself as she panics, and can’t move. Kirito reassures her though that true strength comes from facing your problems and moving on. She’s been using her trauma as an excuse for everything wrong with her. She has yet to accept what happened, and learn from the experience which is what Kirito has done.

Even though Kirito and Kikuoka are assured that Death Gun can’t kill within the game, Asuna and the cheerleaders are still concerned for his safety. I’m not really sure what they could do at this point since it’s clear that Kirito is in no real danger. His body is in a secure location, and they’ve established that the amusphere cannot cause bodily damage. Yet everyone has to go on about how selfless Kirito is, and Asuna has to go to him and be by his side.

Either way, this episode was enjoyable even if it was a bit slow. We’ve had two weeks now for building up to the confrontation. Hopefully they finally face each other and begin to close out the arc next week.

You can watch Sword Art Online II episode 11 on Crunchyroll, Daisuki, and Youtube