I’ll start off this post by saying how amazing Miyano Mamoru’s voice acting is! He manages to pull off Tsukiyama’s erratic behavior perfectly. This guy is absolutely bonkers and is a textbook serial killer. He can put on a completely respectful facade one second, and then break down into his animalistic tendencies the next.

We saw previously, that Touka had a human friend that she cherished. She was pretty harsh to Kaneki in the past regarding keeping Hideyoshi so close, despite being in a similar situation herself. She forces herself to be a “normal” friend even though it’s a detriment to her health. Kaneki seeing this side of Touka gives him a better understanding of her. She goes to extremes to have a normal relationship with Yoriko so that she doesn’t get caught up in the ghoul world.

Nishiki turns out to be in a relationship with a human girl. In the past, he gave Kaneki a hard time for keeping a human so close to him, yet he’s in a similar situation. He was traumatized from what happened to his sister and refused to trust humans. As a result, he treated all of them as food. But after seeing Kimi willing to sacrifice herself for him, he changed. Even though there are so many messed up people in the world, it’s hard to not have faith in those close to you. Nishiki already lost everything once when his sister was killed, and Kimi lost everything when her family died. Now the two only live for each other since that’s all they have left in the world.

The fight against Tsukiyama was pretty one-sided. We have Kaneki who can’t control his Kagune, Nishiki who’s still wounded, and Touka who’s weakened herself from eating normal food. I guess since Kaneki was originally a human, his flesh would suffice as an energy source for ghouls. Since Tsukiyama is too preoccupied at making the “perfect” meal, he lets his guard down. He could have done the deed long ago, but drags it on which gives Touka a chance to defile his meal. 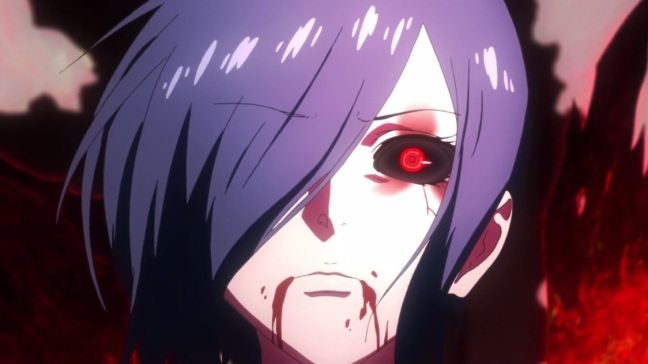 I actually went ahead and read the manga for Tokyo Ghoul. While this episode was pretty good, in my opinion, they did breeze through a lot of material. They skipped over a lot of minor details (Kaneki’s training, explanation behind Kagunes). I think after the Gourmet Arc finishes, we’ll be going back to the Doves where they’d fit in some of this information. It’d make a lot more sense to have this stuff revealed from the human’s perspective anyways since they’re the ones who have been researching on it whereas the ghouls are already aware of it.