If you’ve followed along my previous posts, you’ll know that Tokyo Ghoul √ A was one of my most anticipated series for the Winter 2015 line up. Having read the manga, I found myself enjoying and appreciating the new episode, even if it’s going down an original path. To kick off the new season of anime, here are my Tokyo Ghoul S2 first impressions!

Starting off with the OP, I knew it’d be hard to top Unravel in terms of quality. The lyrics and tone of the song fit Tokyo Ghoul perfectly. With that said, I wasn’t a huge fan of osterreich’s “Munou”. I can see that the lyrics and animation do hold significant meaning in regards to Kaneki’s character, but it didn’t catch my attention as much as the first opening did. Who knows, maybe it’ll grow on me as I listen to it more. As of now though, it doesn’t really stand out too much to me.

Leaving off where the last season ended, Kaneki’s already handled Jason, CCG engages with Owl, Touka and Ayato duke it out, and the three stooges take on Noro. The CCG have a secret weapon up their sleeves, a Kakuja based quinque named Arata. Which also happens to be the name of Touka and Ayato’s father. They equip their body with a kagune, allowing themselves to be consumed by it, in exchange for ghoul like powers. 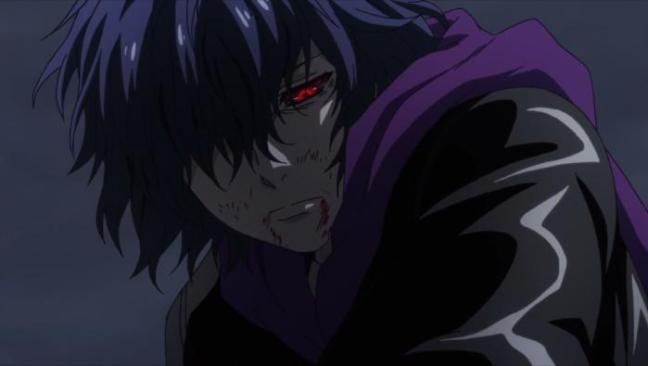 Ayato takes out his frustrations on Touka. The two were close in the past, but after the loss of their father, Ayato switched sides. Arata loved people yet he was still betrayed by them. He refuses to co-exist with humans and believes ghouls are the superior race. In the end, it seems like he’s really just scared. Seeing what happened to his dad, it’s likely that he joined Aogiri to protect himself. By being with other strong ghouls, his chances of survival are much higher. 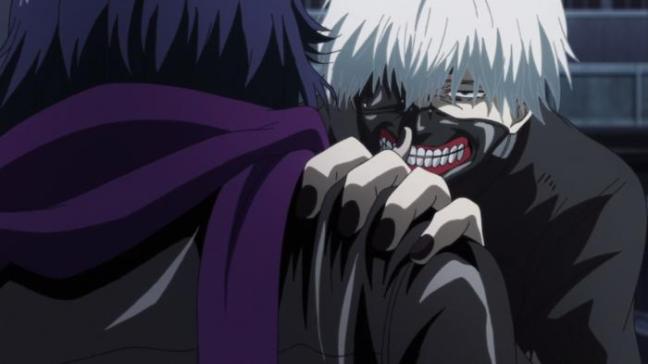 Kaneki manages to have impeccable timing to save Touka from her brother. He’s completely changed. He’s a lot more confident, and not afraid to speak his mind. He also seems a lot more sadistic, especially after the torture he endured with Jason. Even then, when he’s with Touka, he still seems like the old Kaneki. He has this tough guy persona to intimidate others, like Ayato, but deep down he’s still the same caring Kaneki.

Watching Kaneki, the Aogiri takes an interest in him. Their goal was originally to capture Rize, but his quick development has caught Eto’s eye.

It seems that this whole raid was planned by Aogiri. They used it as a way to lure CCG deep within their territory, only to self destruct their headquarters, trapping them. The Owl talked about in the legends was a monster who showed no mercy, yet this one spared the lives of Shinohara and Iwa. Seeing how Aogiri’s goal was to cripple the CCG, it’s safe to assume that this Owl is not the same as the other one who was associated with them.

Amidst all this destruction, several other parties were watching from afar. Kuro in particular seems to only have one eye whole in her mask, similar to how Kaneki covers his human eye. Combined with the fact that they’re with a mysterious doctor, sets up for the future arcs of Tokyo Ghoul. We also see Nico again. Even though he followed Yamori around, he seems to have his own agenda. They reveal his true association, the Pierrots (clowns). These people were responsible for Kaneki’s accident at the start of the series. 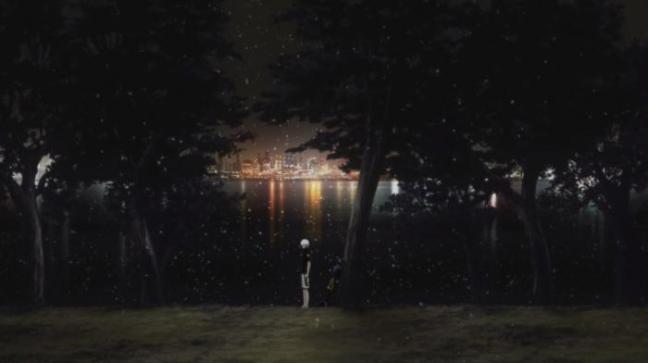 In the end, Kaneki reveals his decision to leave Anteiku and follow the Aogiri. This has to be traumatizing for Touka, since this is the second time it’s happened to her. This is where the series sets off on it’s original path, and I’m really interested in finding out Kaneki’s motive. He questioned Ayato’s decision, and he’s aware of all the suffering and chaos that the Aogiri is responsible for. Yet, he still decides to side with them after all that they’ve done.

Perhaps he’s in a similar situation as Ayato. He knows that he’s still weak, but he wants to protect those dear to him. By joining Aogiri, he can gain strength and protect those he cares about. Or maybe he’s still trying to find himself. He’s already experienced what it’s like to co-exist with humans in Anteiku, but now that he’s embraced his inner ghoul, that Aogiri may be better suited for him. Whatever it may be, I’m excited for the rest of the season!

I’m not sure how to pinpoint it, but this episode felt completely different from the first season for me. Maybe it was the new Kaneki, or all of the small details that were present throughout the episode. While the action was great, my favorite part of the episode had to be the ending.

The silence, followed by the OST building up to Kaneki’s decision was well done and left an impact on me. Seeing Kaneki set off into the light with his new comrades, with that amazing build up music, helps set the tone of what’s to come. No one knows what to expect next, but if that ending wasn’t hype, I don’t know what is! While I’m a bit disappointed that we won’t see the manga get a faithful adaptation, I would rather have a coherent story than have a poor adaptation of the second half.

You can watch Tokyo Ghoul S2 Episode 1 on Funimation