We’re back with another weekly review of some Fall 2014 anime series! This week, I’m keeping it a bit shorter since I’ve been working on other posts (Top Anime OPs of the season) and I’ll have a longer post next week for the mid season review. 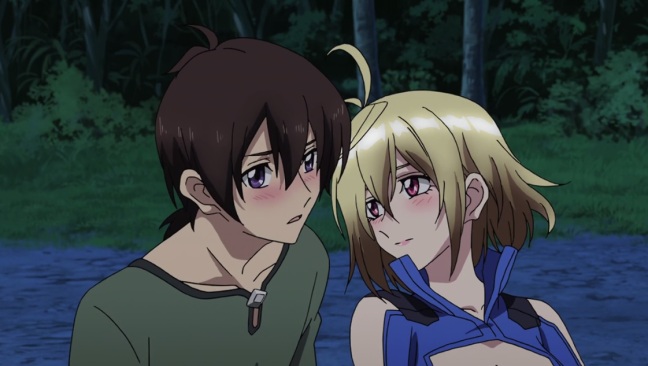 Holy moly, why is this show so damn entertaining? Apparently, the logical thing to do when you find an unconscious pilot is to strip them and then tie them up. There was quite a bit of fanservice thanks to Tusk literally falling into every harem common harem trope. Either way, Tusk saves Angelise from a rough spot. She was determined to survive on her own and refused to acknowledge others. Tusk continuously offering a helping hand and saving her, helped her break free of this behavior.

Part of me is going to miss the bad ass Angelise who treated everyone as scum, but I guess change is for the better. This whole ordeal has opened her eyes. She realized that it’s okay to receive help from others. While some of the other Normas treated her badly, there were many who welcomed her with open arms, despite her being cold towards them. 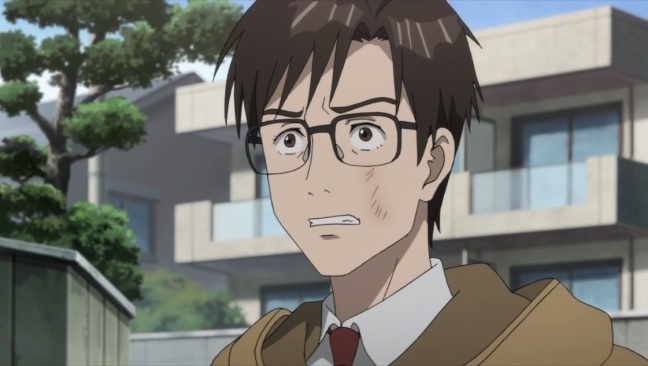 Shinichi is still struggling with his identity. Even though Migi did not take his brain, everyone around him has been noticing him changing. At heart, he’s a kind person, but some of his actions also seem to be fueled by his desire to prove himself. A good samaritan would save his classmate, as he did, but instinctively, many people would have just ran. As Migi mentioned, most animals first instinct is their own survival. Shinichi tries to justify that he is still a human by attempting to save a fellow person.

I found it weird how Kana managed to escape any sort of criticism. Her friends  were the ones who caused the scuffle. I guess she did try to stop the guys from picking on Shinichi, but she sat as a bystander when the other person was beaten. Her special power is pretty odd. I guess she’ll play a bigger part in the series though since she is able to detect these parasitic creatures.

When we were first introduced to that random parasite in the beginning, I was expecting it to be just a random case, to show us another one of their weaknesses. Unfortunately, this series isn’t as naive as I was and it takes Shinichi’s mother away. This just goes to show how unpredictable life is. Shinichi was a bit cold to his mother recently, by withholding important things from her. She may have thought that he was just growing up and changing, but now Shinichi will never be able to tell her how he really feels.

Seeing his mother walk into the house after his dad’s call, Shinichi completely breaks down. I thought he was handling it pretty well after his dad’s phone call, but seeing it in person is a completely different thing. He goes into complete denial, probably because of his recent interactions with his mom. He felt bad for making her worry, especially after all she’s done for him. He never got a chance to come clean or tell her how grateful he was for everything. Overall, it was a powerful scene with him blabbering about everything to his parasite mom, although I think it would have been better if they didn’t throw in the dubstep towards the end! 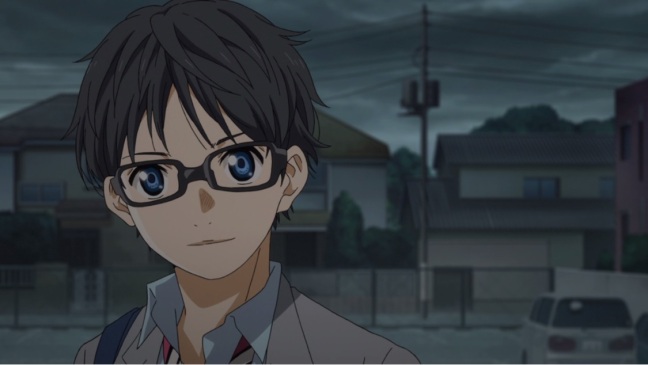 I’m really a fan of all of the inner monologues of the characters. Kousei continues to lack confidence, and has no faith in himself. He had a blast performing with Kaori, but now that it’s over, he’s slipping back into his depression. He keeps telling himself that he had one purpose which has now been fulfilled, and his normal life would resume. Every time he sees Kaori though, the world lights up once again.

He’s convinced himself that his relationship with Kaori was over. He helped her out in a pinch, and she can now go back to being lovey dovey with Watari. Kaori feels differently though. Maybe it’s the connection of being a fellow musician, or a blossoming romance, but she refuses to leave Kousei alone.

Despite being so lively, Tsubaki is lost at the moment. She told herself that Kousei is like a sibling, but she clearly has more feelings for him. Even if she never saw him that way until recently, feelings change over time. Not long ago, she was crushing on Saito, but once he left, those feelings just faded away. Now that they meet again, she doesn’t have the same spark as she did in the past. She’s also growing more conflicted with Kousei. She’s been by his side since they were kids, but she was never able to help him out with his depression. Only once she introduced him to Kaori did his life finally begin moving once again.

That brings a close to week 5 of the fall season for me. As I mentioned at the start of the post, I’ll be doing my mid season review next week, which might take a bit more time. Until then, you can always check out my other reviews such as my Fate/Stay Night and Psycho-Pass ones!